I have had a love-hate relationship with shaving ever since the first time I used a BIC (dry, of course) to shave off sideburns back in grade nine or ten (can’t quite remember). I have followed the Gillette company through the Sensor, Sensor Excel, Mach 3, and Fusion, paying dearly for it through each upgrade. Using the Philishave Coolskin helped a tiny bit, but there were refills and after the first model, they seemed to go downhill. I have tried all sorts of combinations of shaving gels, pre-shave oils, aftershaves, and creams to try to prevent razor bumps. And never been able to get satisfaction. Until recently.

A couple of years back, I stumbled across and then again  more recently from this through . It wasn’t until about a month ago that I actually decided to take the plunge – partly because it sounded promising, partly because I was finally in a situation to 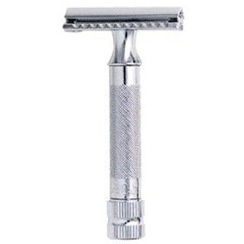 I’m not sure how the shift happened from double-edged razors post-World War II to safety razors, but the only advantage I can see is a ton of money in Gillette’s pockets. After using shaving soap and a DE razor for a few times, it’s obvious that the combination provides a far superior shave.

Here are some great resources from Badger and Blade for anyone who’s interested:

And this affects the environment how?

This post is filed under the ‘environmental’ tag because this, the chickens, the garden, and hopefully most of my choices/actions have a small positive effect on nature. For shaving, the list is simple (and could make a dramatic difference if more people adopted it): Is it for everybody?

I firmly believe so. The only possible downside is a slower shave, but I find the whole ritual quite relaxing. Along with helping the environment and saving money, it’s also forced me to pay closer attention to the direction of hair growth, provided me with a new skill, and, most importantly, consistently given me the best shaves possible at home.

Canadian Stores: (where I ordered from),
List from Badger and Blade